note: Huning Highlands is a Historic Overlay Zone (HOZ) within the City of Albuquerque. The boundaries are not identical to those shown here.

The Huning Highlands subdivision, Albuquerque’s first suburb, is located roughly between Broadway on the west, I-25 on the east, Iron on the south, and Martin Luther King on the north. The subdivision was established in 1880 by Franz Huning, William Hazeldine, and Elias Stover who had been instrumental in bringing the railroad through Albuquerque. Originally, it was almost exclusively residential and was home to many of the more prominent citizens of New Town (the current Downtown). Around 1925, the neighborhood began to decline and many homes were subdivided into apartments. Central Avenue became part of Route 66 in the early 1930s, and commercial development happened along that corridor. In the late 1970s, Huning Highlands was rediscovered and many new owners began to renovate the old homes, an effort still in progress.

The myriad of Victorian, Queen Anne, Italianate, and other styles and details were in contrast to the adobe houses of Old Town. Catalogs of building styles from back east were readily available, and components of these styles could be ordered and delivered by train. These components were added to the residences occasionally in very unorthodox ways, a process some have called “Victorian Fusion.”

A number of important historical buildings are in this District, including four City of Albuquerque Landmarks:

The original Albuquerque Main Library was designed in the Mission Revival style with the unusual inclusion of Prairie Style, grouped windows instead of separated ones. Later additions in the Spanish Pueblo Revival style provided more reading rooms, book storage, and a public meeting space, Botts Hall. This variety of styles is compatibly combined despite the passage of time between additions. 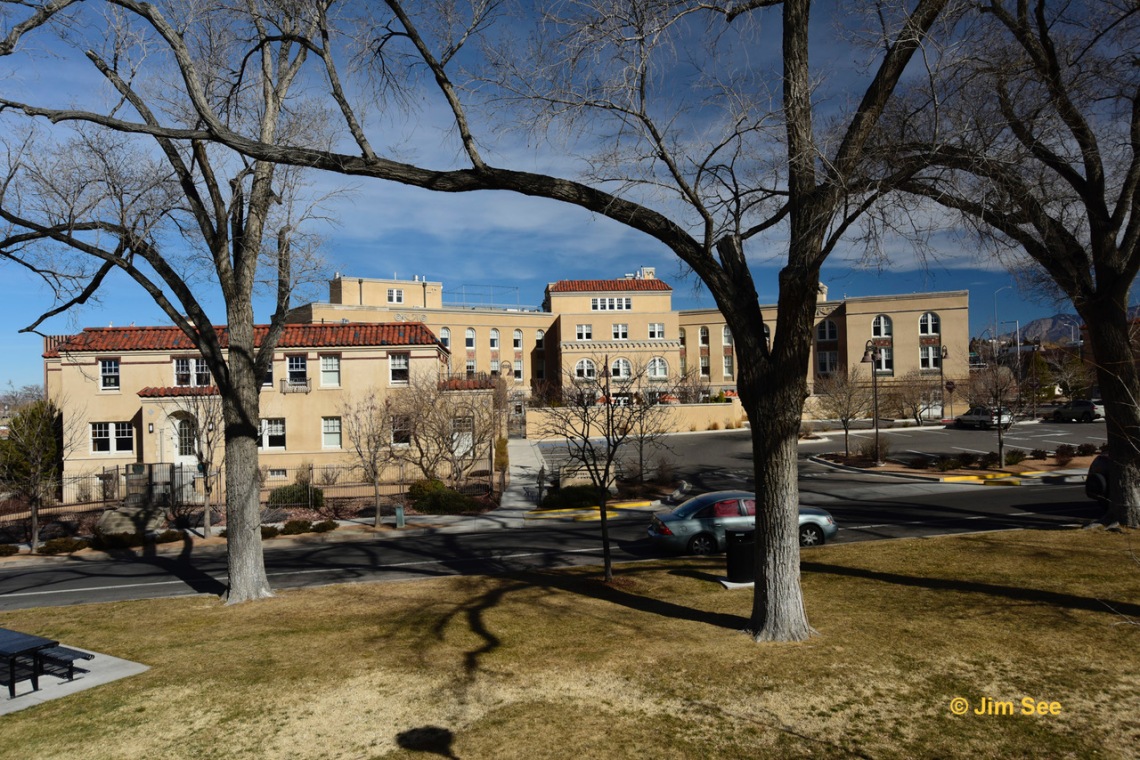 This Mediterranean Revival style structure dominated the landscape when it was first built by the Acheson Topeka and Santa Fe Railroad. Albuquerque, one of the most important treatment centers for tuberculosis in the Southwest, also lead the development of hospital architecture of the time. This architectural design lent itself well to hospitality functions once that disease was conquered.

This unique, log structure, was designed by the architect Charles Whittlesey as his residence. Whittlesey, the chief architect for the Santa Fe Railroad Company, also designed El Tovar Hotel (1905) at the Grand Canyon in what he referred to as a “Norwegian villa” style. Perhaps, his early research on that project influenced the design of his Norwegian log cabin style home, or vice versa.