This architect’s unusual residence and separate studio gallery are quite special for Albuquerque. The visual complexity of the residence’s unique series of volumes disguises an architectural diagram that is best described from the top down. The top floor is a long, flattened tube placed parallel to the long dimension of this very narrow site. Four cylindrical, hollow pillars (aligned along this long dimension) support this tube and all the major enclosures. A large circular volume engages the western two pillars, and a smaller circular volume engages the eastern two pillars. The visual complexity is accomplished by exposing all the supporting beams and columns and the addition of surface art to walls, balcony railings, window and door treatments, beam ends, and other opportunities that present themselves. 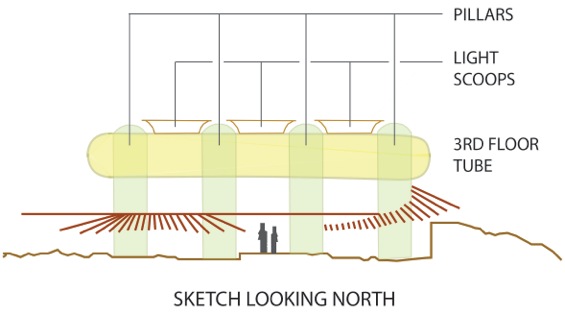 Windows on the south-facing facades of the house take advantage of the long southern exposure of the site. Three light scoops on the northern portion of the third-floor roof capture southern sun in the winter and bring it into the northern part of that volume. The cylindrical library tower was appended to the residence’s southern face in 1990; the dramatically linear studio gallery, built in the 2000s, stands alone—albeit sitting atop a smaller stuccoed structure—just to the north of the residence.

Bart Prince’s architectural vision is unique and defies a style name. While his work is purely his own, one can also see in it the influence of Bruce Goff, a colleague and mentor of Prince.