The Nob Hill District began by catering to the 1930s residential area that was developing east of the University of New Mexico. It grew after WWII as Albuquerque’s first suburban shopping area based upon the automobile. Central Avenue, a portion of US Route 66 from 1937 until the present day, is the backbone of this district with its once spectacular neon signs. The area suffered a decline in the early 1970s with the opening of Coronado and Winrock Shopping Centers further to the northeast and convenient to Interstate 40. In the early 1980s, developers began to take interest in Nob Hill once again as a pedestrian-friendly alternative to the large-scale shopping centers.  The newest addition, the Albuquerque Rapid Transit (ART), while disruptive in its construction, is intended to facilitate more pedestrian access to Nob Hill.

Sites presented below start with the Nob Hill Business Center as the anchor to the development. Following, are other important sites within a few blocks of that focal point, some built before the Business Center and others after.

Learn More:
National Park Service Route 66: Scroll right and left at the bottom of the site to see other properties in the Nob Hill area.
Context of Route 66 in New Mexico from Wikipedia 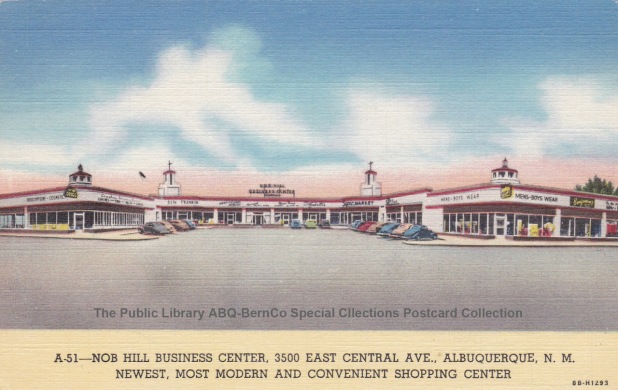 The Nob Hill Business Center offered a new idea: off-street parking for customers.  World War II was over, and cars were becoming available again. Commercial establishments responded. This site plan is essentially a “U,” opening to Central Avenue with the parking in the middle. The site slopes substantially from Silver Avenue, on the south, down to Central Avenue, requiring shop entry levels to change with the slope.

Architect Lewis Hesselden, trained in the Beaux Arts tradition, favored symmetrical designs.  He also utilized his knowledge of perspective to enhance designs. For example, the towers on the “back” (south) side of the Center are larger than the towers on Central. This perspective device makes the back towers look about the same height as the front ones to the viewer on Central Avenue. Therefore, the stores further from the main street seem as important as those “up front.” Notice that the south towers are not identical. 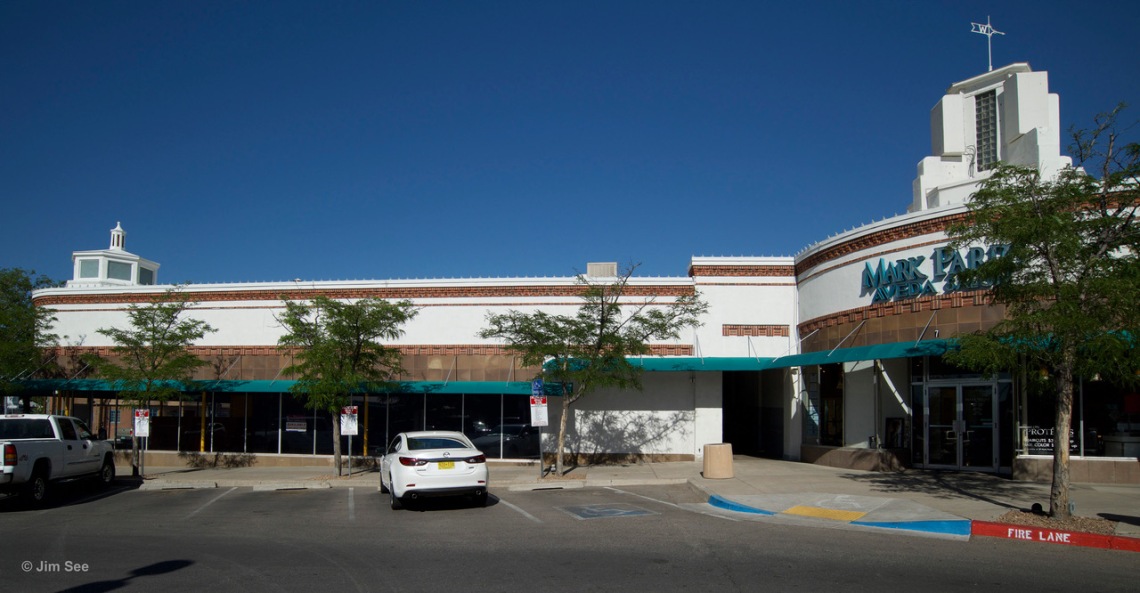 Hesselden also understood how to address entering a space at the inside and outside corners, a necessary requirement for a structure that needed numerous entryways. The outside corners are curved, and then indented for the doorway. The inside corners have larger curves, also with indented entries. 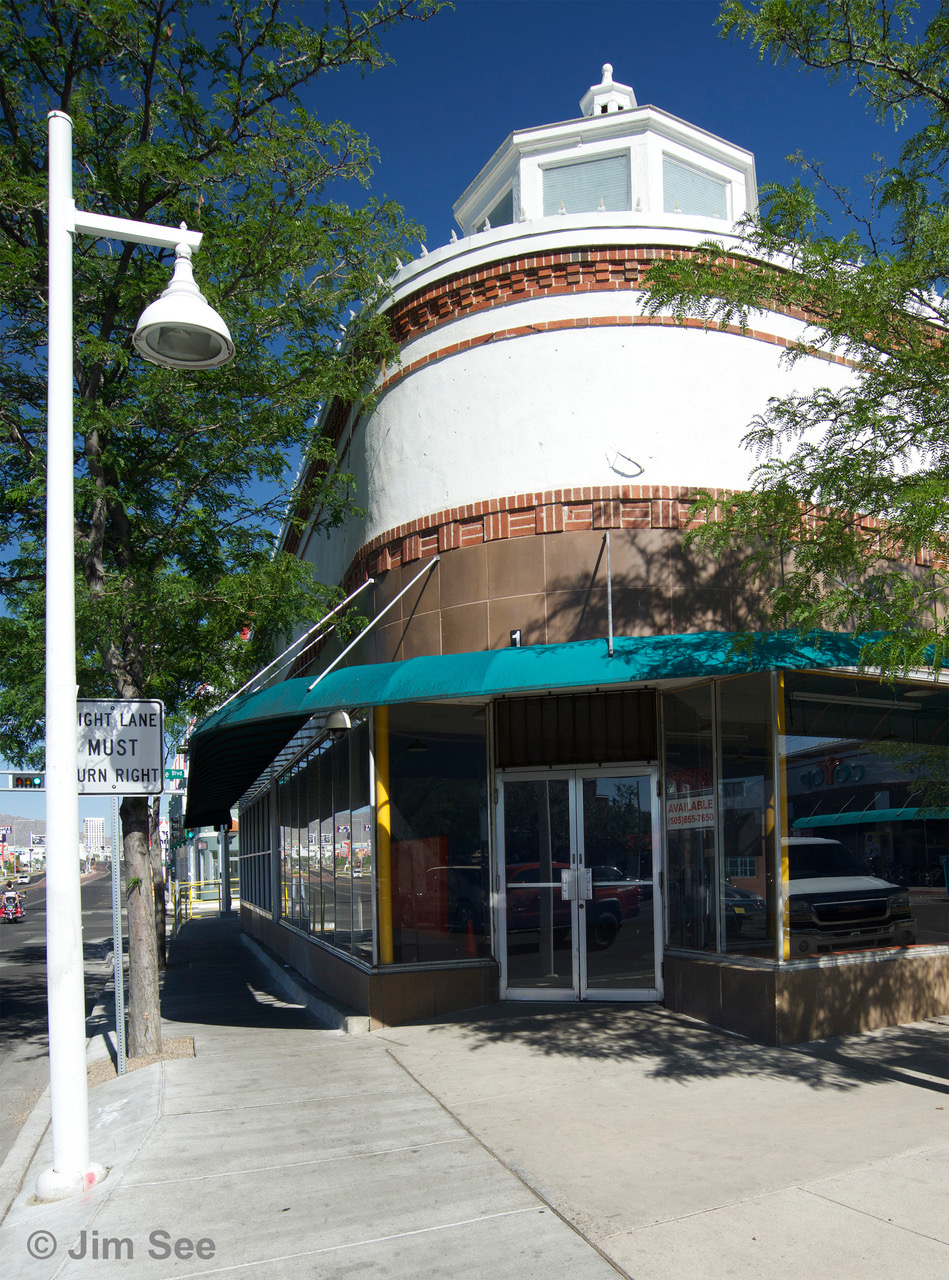 The Nob Hill Business Center was designed in the Streamline Moderne style.  The building’s major material is smooth, white stucco, and it has curved corners, as was common with that style. But, the parapets have tan brick copings common with the Territorial Revival style. Brown tiles in a bold horizontal stripe also refer to Southwestern architecture, unlike Streamline Moderne buildings. 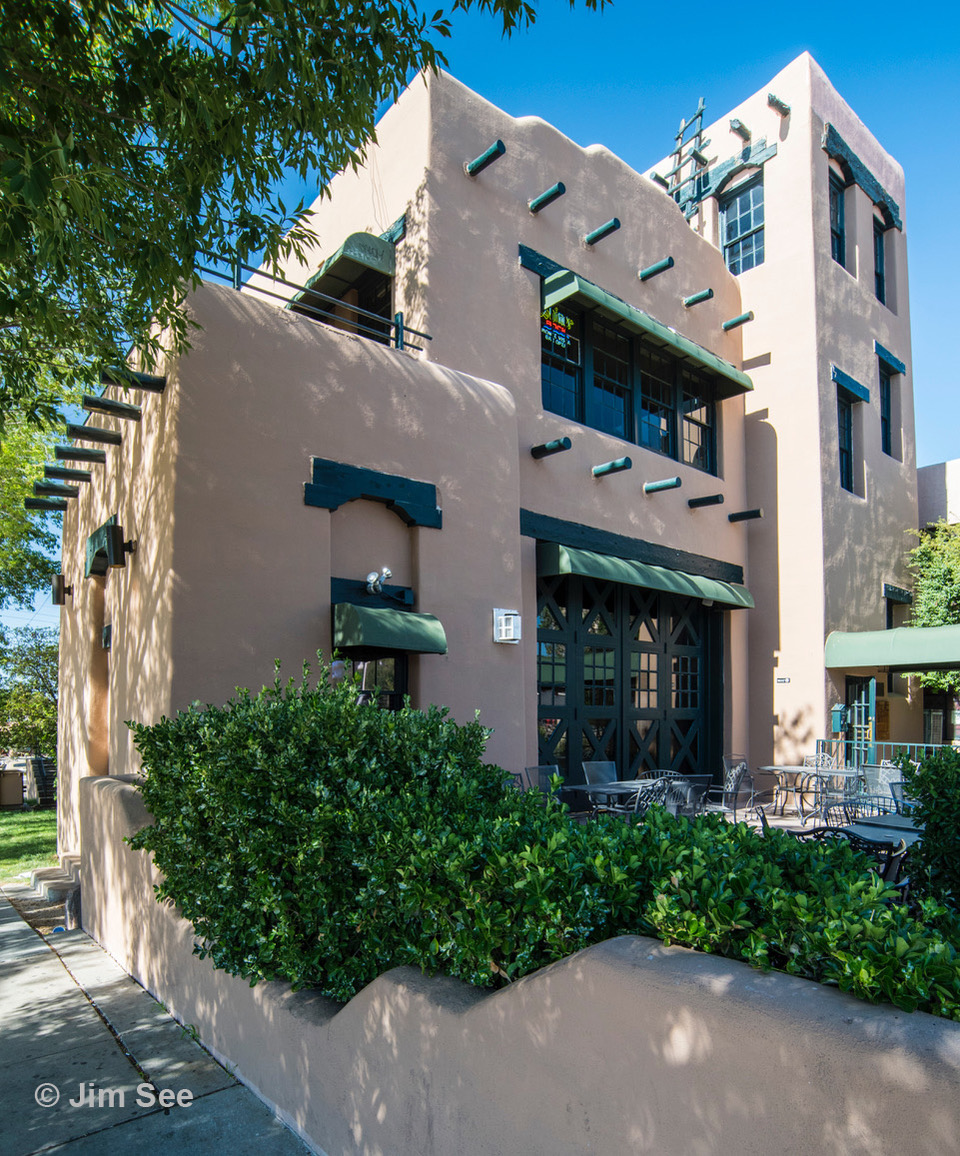 As it developed, the Nob Hill area needed a fire station. The City took advantage of Works Progress Administration (WPA) New Deal funds to build Monte Vista Fire Station. It remains an excellent example of Spanish Pueblo Revival architecture with soft corners, exposed vigas, separated windows, stepped parapets, and additive massing. The building is not built of adobe, but of clay tile covered with brown stucco.  It may be the only fire station of this style in the country. By 1972, the standard fire equipment had outgrown the building, and the fire station was sold. It now houses a restaurant. 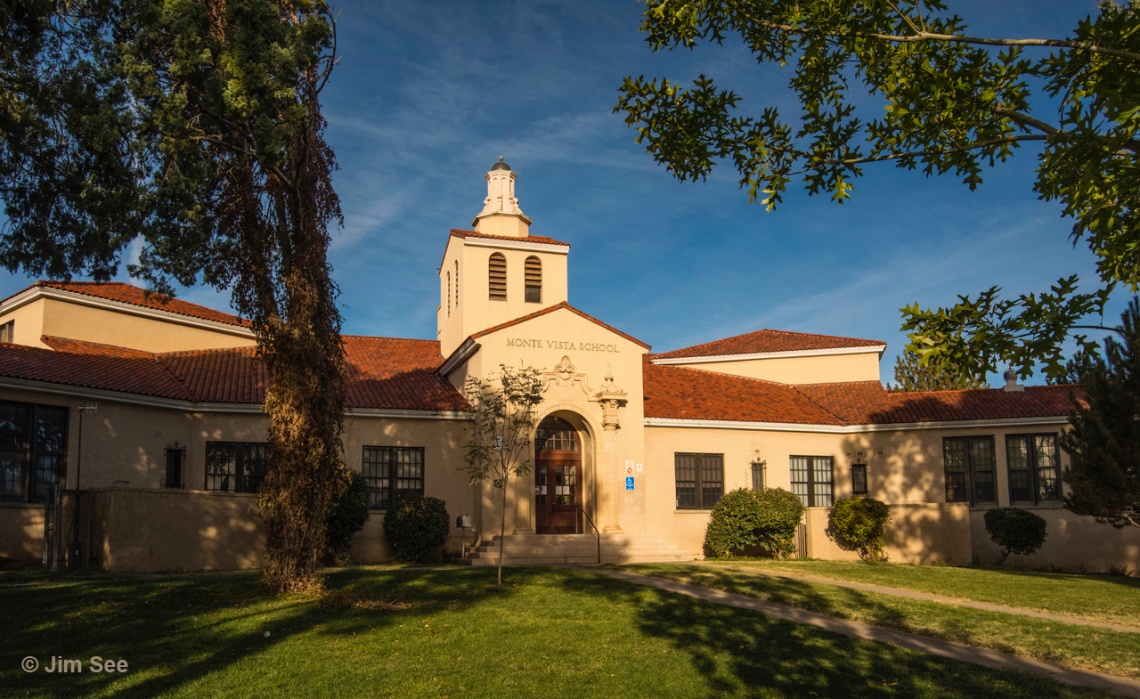 Monte Vista School was the focal point of the first subdivision built east of the University of New Mexico. The front entrance, with its Churrigueresque style terra cotta surround, celebrates the name of the school by facing the Sandia Mountains on an axis that bisects the eastern point of the site. Above the entry is an octagonal lantern atop a square tower. The entry level is one story, while the classroom wings are two stories. In keeping with its Mediterranean Revival style of architecture, the pitched roof is covered with barrel-shaped red tiles. 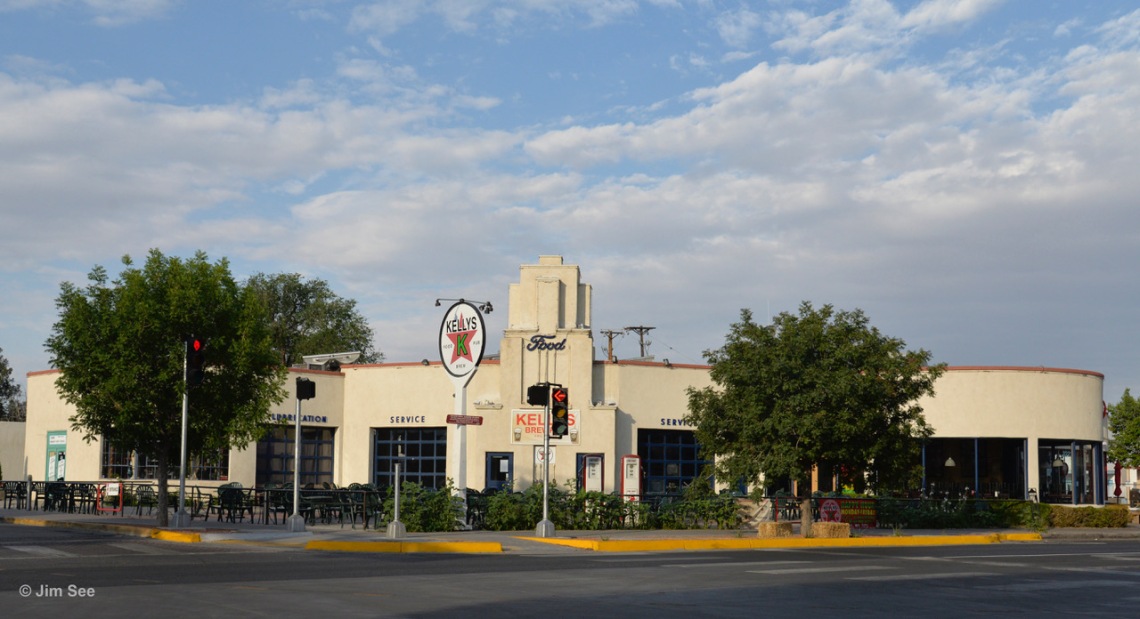 The Jones Motor Company exhibits the Streamline Moderne style associated with fast automobiles and the lure of the Mother Road, Route 66. The stepped tower, curved masses, smooth white walls, and expanses of plate glass beckoned travelers to come in for a fill-up or a repair. It closed as a car-oriented business in 1957, was vacant and underused until 2000. Now, it beckons customers to come in and fill up with a beer and a burger. 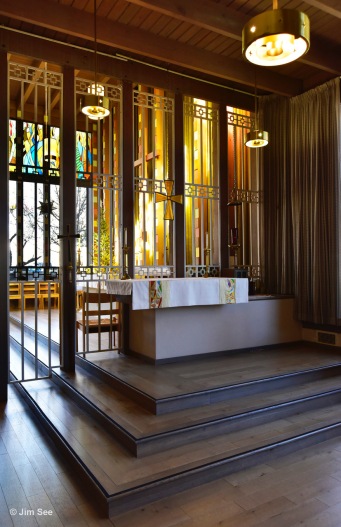 Beginning as a chapel in 1946, St. Mark’s has grown and adapted with Nob Hill. The original chapel by John Gaw Meem is now the Parish Hall. Subsequent additions culminated in the Sanctuary and adjacent Chapel designed by George Pearl, designer for Ferguson Stevens & Associates. These subsequent additions were designed in the Regional Modernism style. The Sanctuary alter wall is proportioned close to the Golden Mean, a shape prized by the ancient Greeks as the ideal. The Chapel joins the Sanctuary perpendicularly and shares the focus of the altar and the natural light from the south-facing clerestory. The 19 fused and bonded colored glass windows were made by Caryl McHarney and installed in 1964. 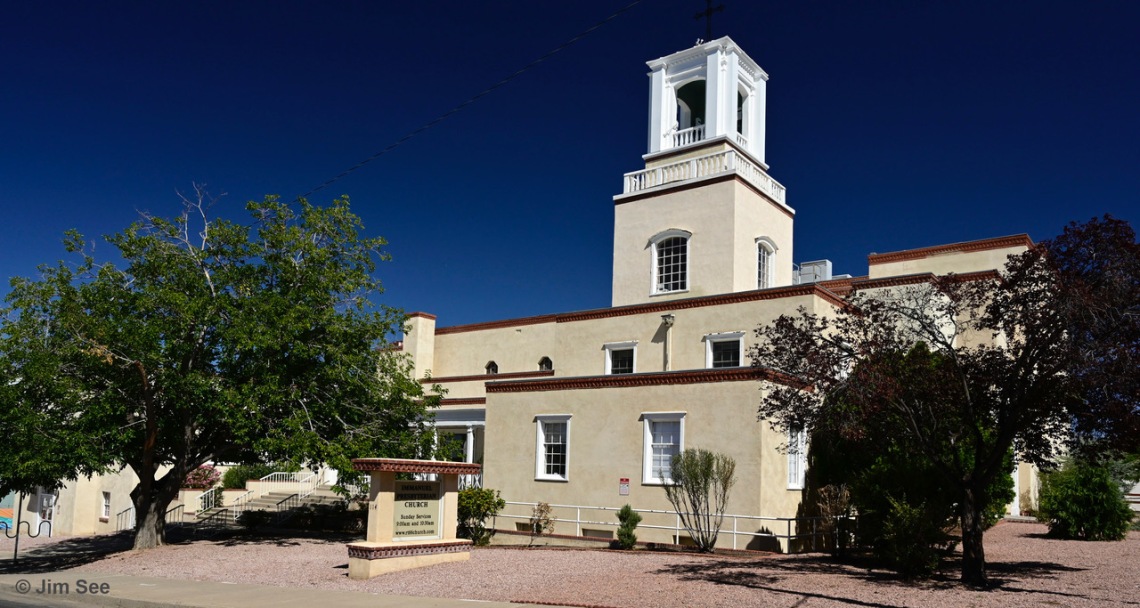 Conceived as a master plan by architect John Gaw Meem and built in three phases under his direction, this collection of architectural masses climbs up Nob Hill with grace and cohesion.  There are classical components such as the bell tower, but all the building blocks are tied together by the stucco color and elements of the Territorial Revival style such as the brick trim at the parapets.  One unusual feature is the entry on the side of the Sanctuary, rather than the end opposite the altar.  This design allowed the major entry to be on the major street, Carlisle Boulevard. 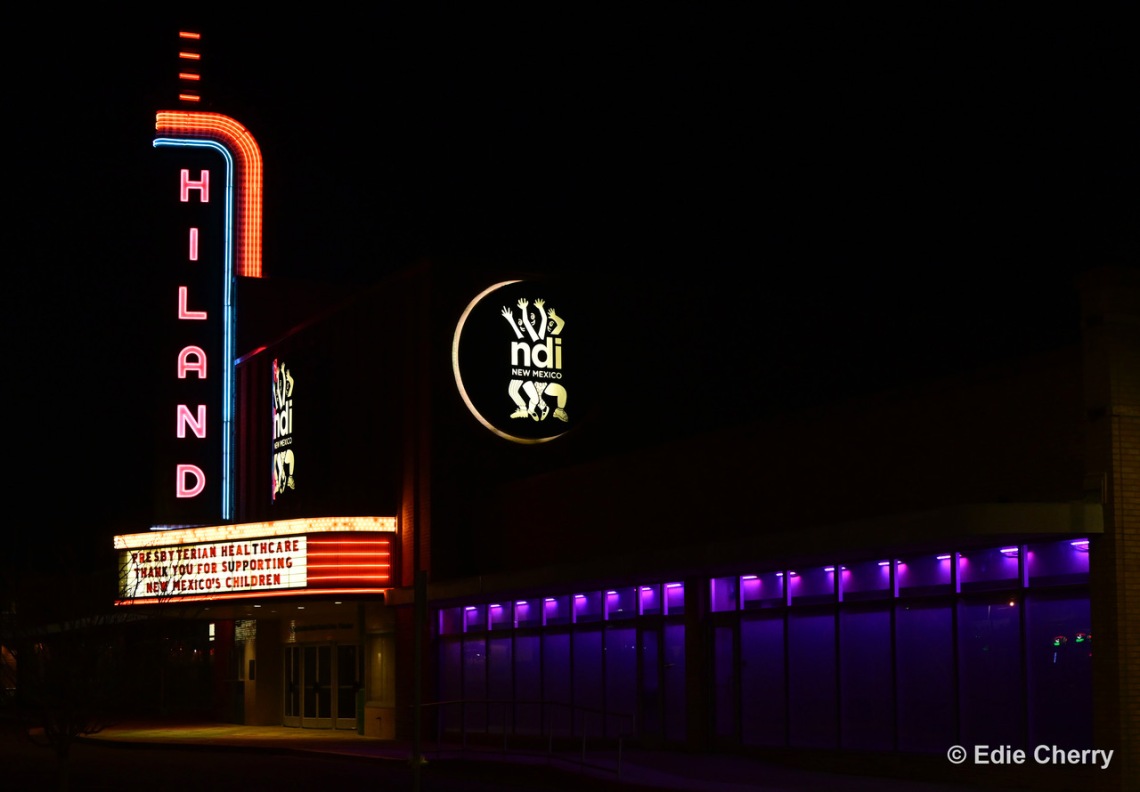 The Highland Theater was the farthest east, suburban theater for many years. Its vertical neon sign did and still does contribute to the “bright lights” image of Route 66. The theater closed in 1995 with the development of newer, multi-screened theaters. The building complex is currently the home of the National Dance Institute of New Mexico.  Its Art Deco details enhance a simple, large box. 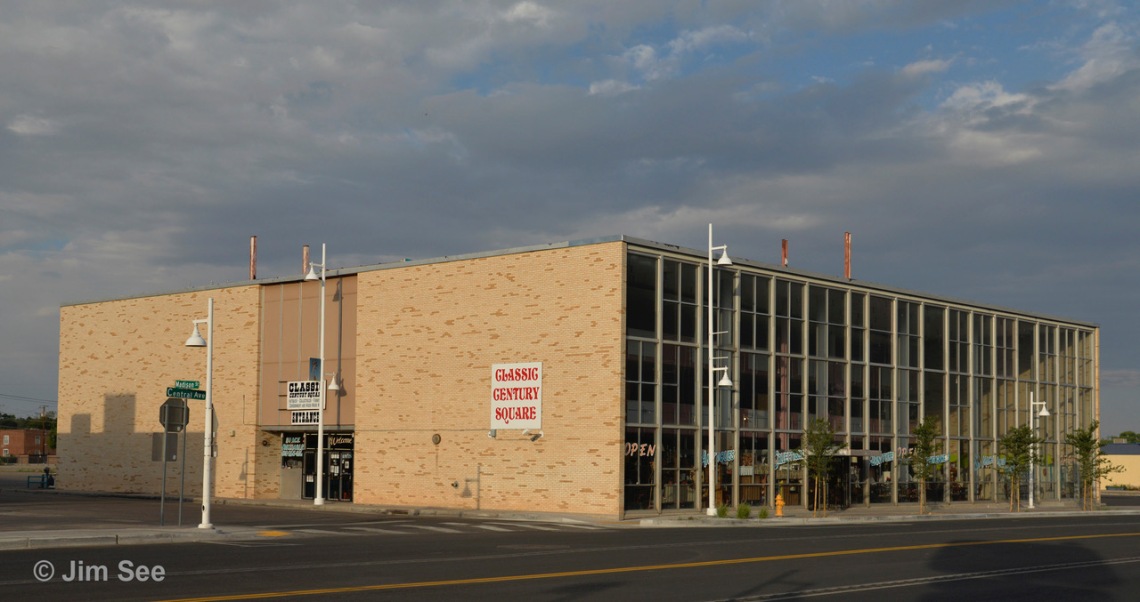 White’s Department Store was one of the earliest and largest suburban retail stores in Albuquerque. This simple three-story Modern box has an all-glass curtain wall facing Central Avenue and provides a view of the Sandia Mountains from its balconies. The glass front aligns with the angle of Central Avenue. The balconies align with the grid of the adjacent blocks. The open, central stairway with its hexagonal landings joins three sets of stairs.

The Place At Nob Hill 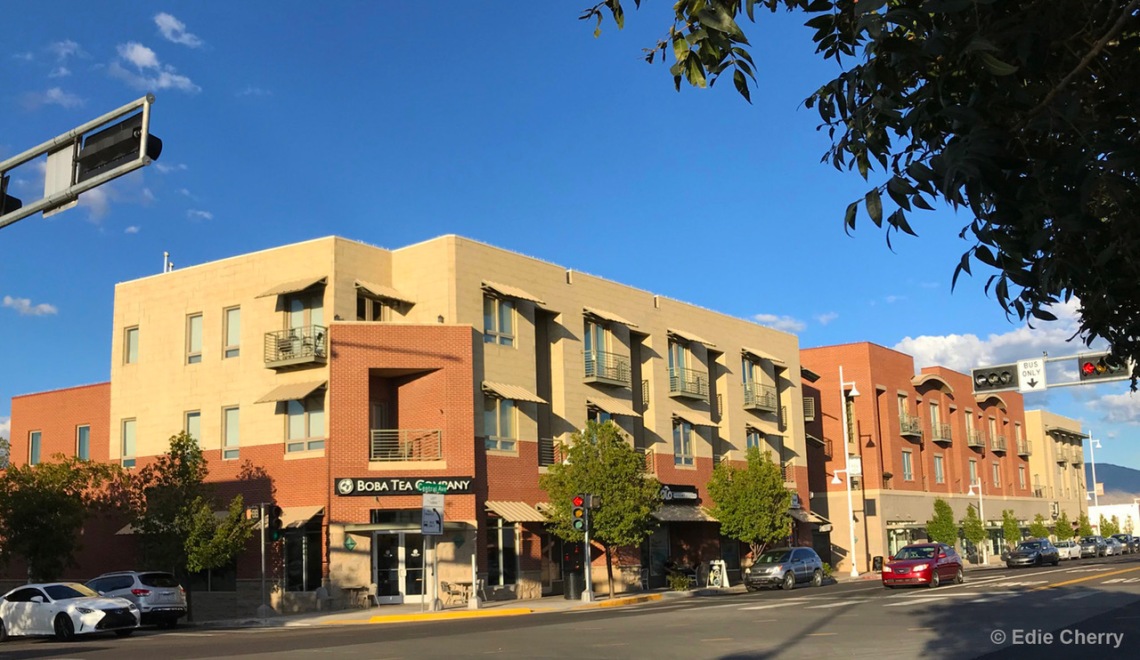 This mixed-use, Contemporary style infill project is the first in Nob Hill to respond to changing attitudes about urban living. The portion facing Central Avenue contains retail on the ground floor and two-story condos on the upper floors, all following the line of Central. The residential units to the north are one story, with decks enjoying a view of the Sandia Mountains.  Their floor plans accommodate the trapezoidal geometry of the site. Their stepped massing reduces the scale of the complex to respect the residential neighborhood to the north.

Materials include brick, cast stone, and metal accents such as awnings. The façade on Central is broken up into three volumes of alternating color to be more in scale with the appearance of the existing street. Vertical slits also break up the façade for this purpose. 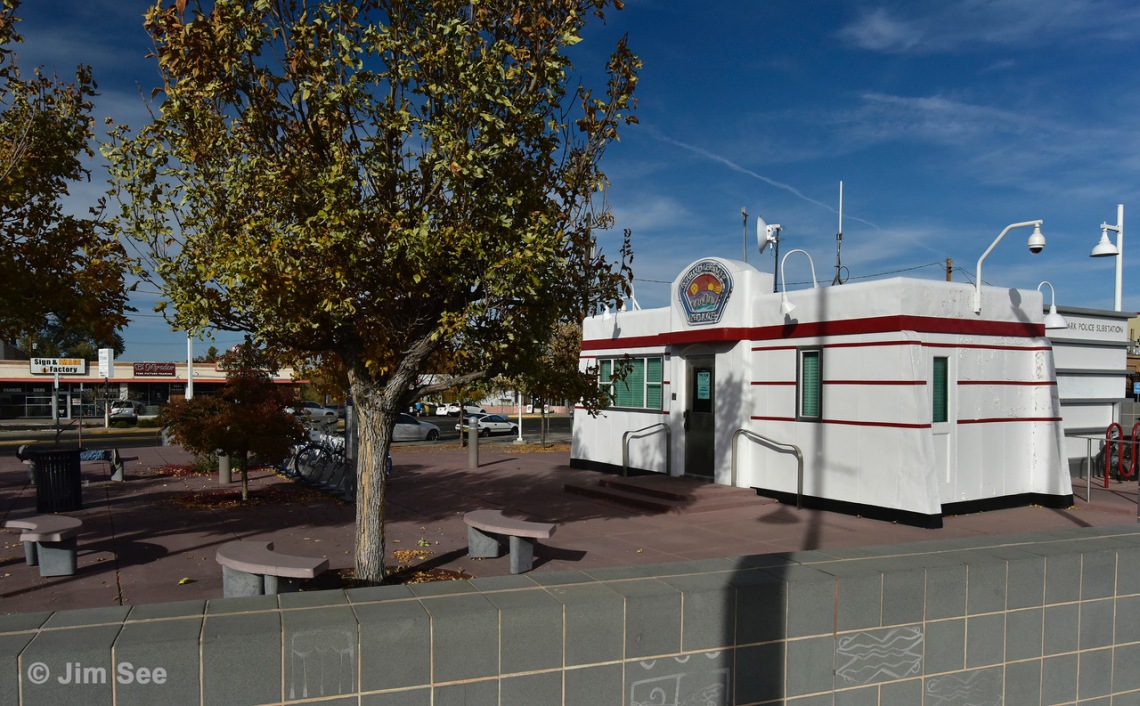 This tiny park occupies the triangle formed by Central Avenue and Monte Vista Boulevard. It is a simple Contemporary design with a small performance area, benches and shade trees. The gray tile walls define the edges and provide additional seating. They are engraved with traditional Southwestern images.

Valentine Diners met the needs of small businesses recovering from the Great Depression. These Streamline Moderne style units were manufactured in Wichita, Kansas and shipped all over the United States beginning in the early 1930s. This unit, Model:  “Aristocrat,” Serial Number 541, originally operated as the Little House Diner at Central and 8th Street SW until street realignment prompted its purchase by the City of Albuquerque. It was installed in Triangle Park and received an addition in 1997. 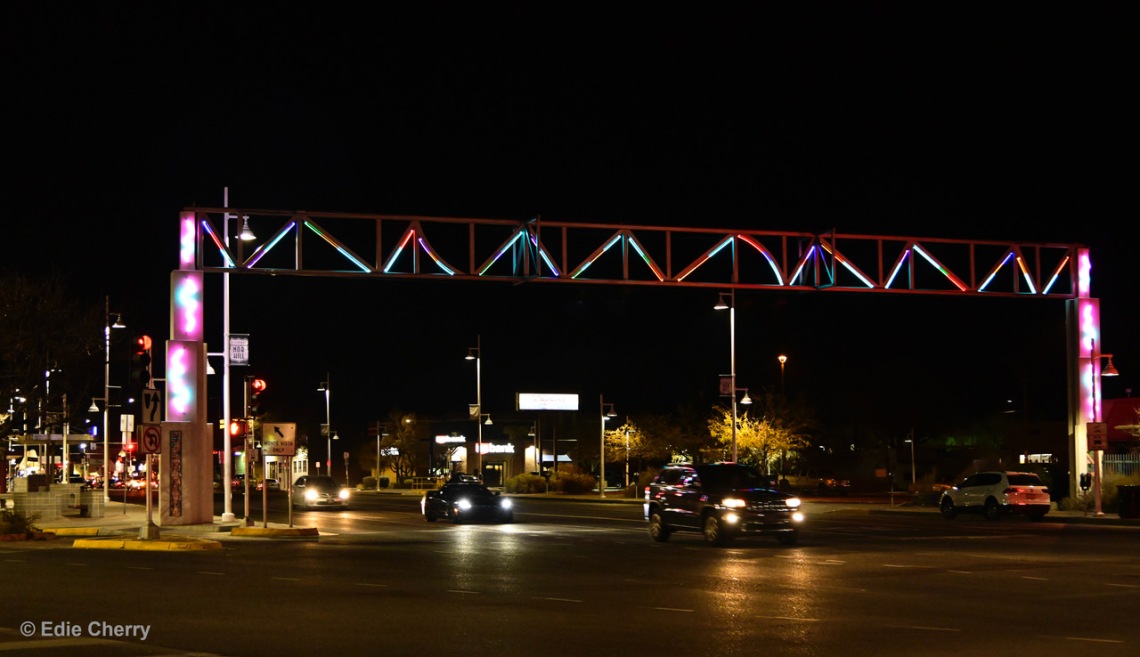 These delicate Contemporary style structures, adorned with neon lights, span many lanes of traffic with a minimum of material of almost the same, thin dimension. Notice that the braces perpendicular to the span are held in place by cables.